Which Crypto Will Tesla Choose for Payments?

Elon Musk was at it again last week as Tesla abandoned BTC payments. However, as the market struggled, ADA shined. Let’s take a look at what happened Last Week in Crypto:

Bitcoin Holds Its Own in the Face of Tesla News 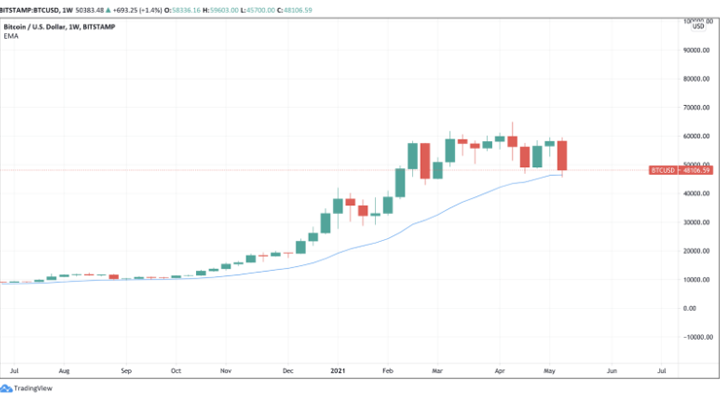 At peak volatility, a total of $200 million was liquidated in a period of 10 minutes on 13th May. Furthermore, inflows to exchanges hit 30,000 BTC which is the highest since the crash in March 2020. That indicates a desire to sell BTC at short notice. However, even with these indicators, Bitcoin has more than held its own.

BTC showed it’s bigger than any single investor changing their opinion by quickly bouncing back from its low of $46,000. The long-term trend is still bullish as the 21-week EMA easily held the price up, a level analysts say is key for the 2020-21 bull run. The next hurdle to overcome is $50,000. ETH continued its run as it hit two new all-time highs in a single day on 12th May. As it reached $4,370, ETH broke $500 billion by market capitalization for the first time ever. Furthermore, the ETH/BTC pair reached a three-year high of 0.08 BTC. However, in the face of negative sentiment in the broader market, ETH fell to as low as $3,500 during last week. Analysts are still confident it’s still a matter of time before ETH makes its way to $5,000.

Cardano (ADA) paid no heed to the broader market sentiment as it continued on its bull run with immense conviction. Even as BTC and ETH dropped, ADA kept making new all-time highs, reaching its highest point on 15th May – $2.20. It has been an exciting year for Cardano after it started 2021 at $0.16. Crossing the psychological landmark of $2 could be huge for the coin ranked fourth by market cap.

Block.one, the company behind EOS, announced that it had secured $10 billion in funding to launch an EOS-based cryptocurrency exchange named Bullish Global. This news saw EOS post double-digit gains, taking the price to $14.88 before steadily declining to $10.5.

On 14th May, Elon Musk tweeted that he’s working with the Dogecoin developers ”to improve system transaction efficiency.” Following the tweet, Dogecoin’s market cap spiked by $10 billion. Furthermore, Coinbase’s plans to list DOGE on its platform within six to eight weeks could have contributed to DOGE’s rally to $0.58 as well.